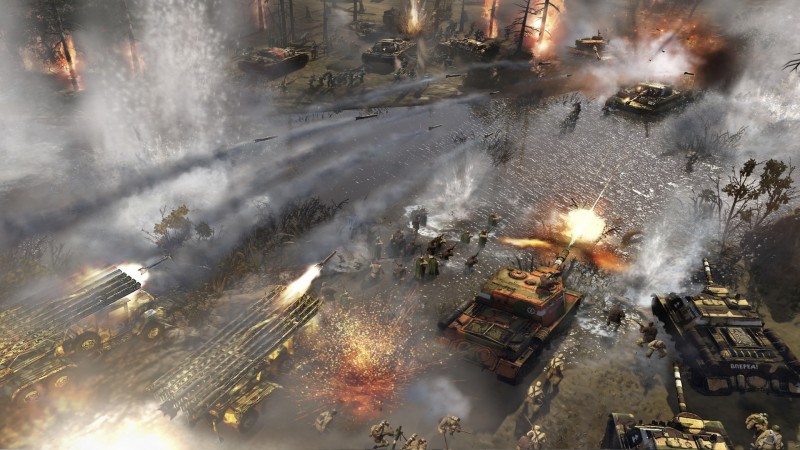 Powered by the Essence Engine 3.0, the Company of Heroes 2 series feature some unique mechanics rewarding thoughtful players. From the TrueSight™ system that emulates the units’ line of sight to the cover-system that encourages clever unit placement – not to mention the combined arms approach and the hard and soft counters gameplay that will make you think twice before trying to destroy a tank with a simple squad of riflemen – each game presents players with an uninterrupted stream of meaningful tactical choices that can turn the tide of war.

Company of Heroes 2 - The British Forces

Play as the unconquerable Britons and their motley-crew of soldiers! A force remarkable for its diversity, including Englishmen, Scotsmen, Welshmen, Irishmen – representing everyone from the working classes to the upper class elite of the United Kingdom. Under the leadership of the fiery Sir Winston Churchill, this assorted mix put aside their differences and became the only remaining Western European nation to escape the grip of Axis-dominated Europe, before leading the final offensive with the other Allied Forces.

The British Army features a brand new set of distinctive tactical gameplay options articulated around a new tech tree including new infantry, team weapons, vehicles, upgrades, commanders with unique abilities and a total of eight new multiplayer maps portraying historic battlefield locations. Battles reach an unprecedented level of authenticity with the addition of motion-captured data for the most common animation sets, which will also enhance all the previously released Company of Heroes 2 armies. By introducing a new faction with a unique playstyle, The British Forces further reinforces Company of Heroes 2 as the most comprehensive World War II platform for RTS fans.

Company of Heroes™ 2: Ardennes Assault is a single-player only standalone experience that will allow you to familiarize yourself with the USF faction through 18 scenarios. To also have access to the USF army in multiplayer, you will either need to buy it separately or through The Western Front Armies.

Continuing the story in World War II, this exciting campaign places you in the heart of the battle, once described by Churchill as “...undoubtedly the greatest American battle of the War”. This pivotal conflict is known to many as ‘The Battle of the Bulge.’ Take charge of US Allied forces as they face tactical challenges and punishing terrain during a surprise offensive manoeuvre led by the relentless resurgent Oberkommando West. Watch the dramatic Battle of the Bulge unfold through the eyes of three different Officers; experience first-hand the unique struggles they encounter during the war, and how the weight of your actions will shape their future. The harsh reality of war is that no one is truly safe, and your Companies are not excluded from this ultimate truth. Bear witness to their heroism in the face of extreme odds, and fight to win control of the strategically critical Ardennes region.

By buying TWFA or the OKW / USF army individually, players who do not yet own any COH2 product can access all existing Company of Heroes 2 maps in auto-match, and play against all other existing factions in multiplayer or through skirmishes against the AI.

Each army has distinctive tactical gameplay options, new infantry, team weapons, vehicles, abilities and upgrades on a total of eight seasonal multiplayer maps set on the Western Front. The Western Front Armies also includes a new progression system that introduces other unique content into the game and enables players to dive deeper into the tactical and strategic aspects of the game than ever before.

This product requires a free Steam account to play.
6,41€
Buy

Company of Heroes 2: The British Forces

This product requires a free Steam account to play.
9,50€
Buy

This product requires a free Steam account to play.
12,12€
Buy