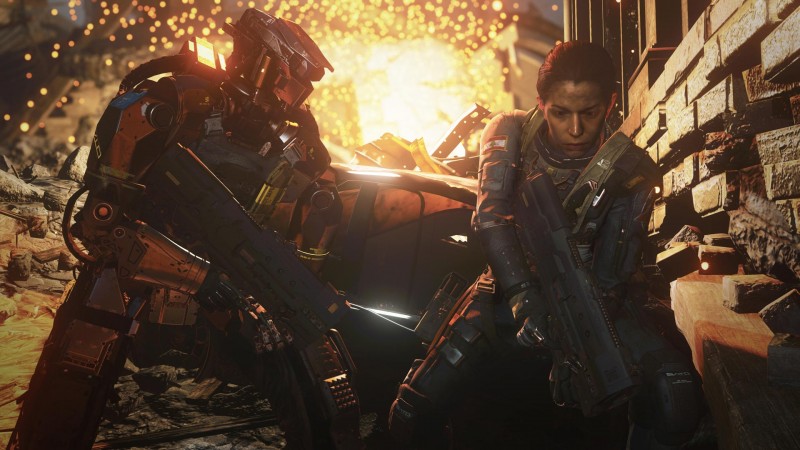 Includes the Terminal Bonus Map and Zombies in Spaceland Pack, contains a weapon camo, calling card, and a Fate and Fortune Card Pack!

In Campaign, players play as Captain Reyes, a pilot turned Commander, who must lead the remaining coalition forces against a relentless, fanatical enemy, while trying to overcome the deadly, extreme environments of space.

Multiplayer combines a fluid momentum based movement system, player focused map design, deep customization, and a brand new combat rig system to create an intense gameplay experience where every second counts. Combat Rigs (Rigs) are the ultimate combat systems. Each Rig is a cutting-edge, tactical combat suit worn by the player and is built for totally different styles of play. Players will also join one of four brand-new Mission Teams to unlock calling cards, camos, emblems, and weapons unique to that team.

In Zombies, go back in time to fight the undead in a 1980s amusement park, complete with a plethora of rides, an awesome arcade, and a funky, functioning rollercoaster. Embrace previously beloved aspects of the mode like easter eggs, power ups, and novel weapons while experiencing innovations like brand-new team mechanics, the After Life Arcade, and Fate and Fortune Cards.

One of the most critically-acclaimed games in history, Call of Duty: Modern Warfare is back, remastered in true high-definition, featuring improved textures, physically based rendering, high-dynamic range lighting and much more. Developed by Infinity Ward, the award-winning Call of Duty® 4: Modern Warfare® set a new standard upon its release for intense, cinematic action, while receiving universal praise as one of the most influential video games of all-time. Winner of numerous Game of the Year honors, Call of Duty 4: Modern Warfare became an instant classic and global phenomenon that set the bar for first-person shooters, and now it returns for a new generation of fans.

Relive one of the most iconic campaigns in history, as you are transported around the globe, including fan favorite missions "All Ghillied Up," "Mile High Club," and "Crew Expendable." You’ll suit up as unforgettable characters Sgt. John "Soap" MacTavish, Capt. John Price and more, as you battle a rogue enemy group across global hotspots from Eastern Europe and rural Russia, all the way to the Middle East. Through an engaging narrative full of twists and turns, call on sophisticated technology and superior firepower as you coordinate land and air strikes on a battlefield where speed and accuracy are essential to victory.

Additionally, team up with your friends in the online mode that redefined Call of Duty by introducing killstreaks, XP, Prestige and more in customizable, classic multiplayer modes.

Call of Duty: Infinite Warfare will only be playable in the region in which it is purchased. For more information, please visit https://support.activision.com/articles/FAQ/Call-of-Duty-Infinite-Warfare-PC-Region-Definitions.

This product requires a free Steam account to play. This product cannot be activated in: Germany and Russian Federation.
12,84€
Buy

This product requires a free Steam account to play.
11,07€
Buy

This product requires a free Steam account to play.
12,77€
Buy

This product requires a free Steam account to play.
8,56€
Buy

This product requires a free Steam account to play. This product can be activated only in Europe, but NOT in Turkey.
11,83€
Buy
×
Activation details