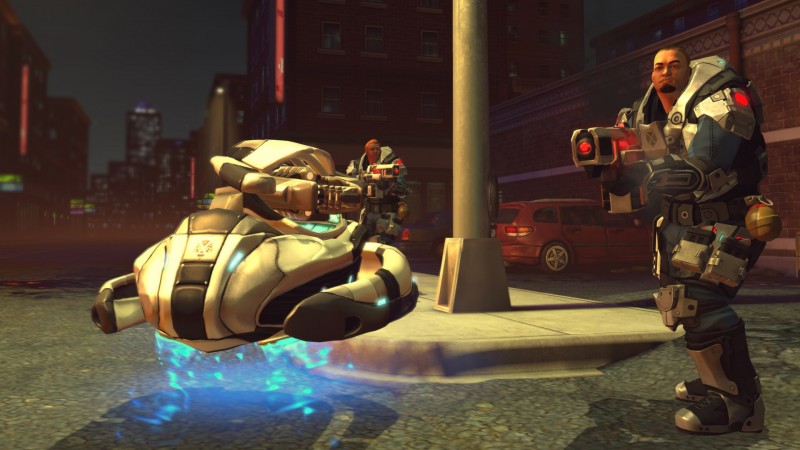 XCOM: Enemy Unknown will place you in control of a secret paramilitary organization called XCOM. As the XCOM commander, you will defend against a terrifying global alien invasion by managing resources, advancing technologies, and overseeing combat strategies and individual unit tactics.

The original XCOM is widely regarded as one of the best games ever made and has now been re-imagined by the strategy experts at Firaxis Games. XCOM: Enemy Unknown will expand on that legacy with an entirely new invasion story, enemies and technologies to fight aliens and defend Earth.

You will control the fate of the human race through researching alien technologies, creating and managing a fully operational base, planning combat missions and controlling soldier movement in battle.

XCOM: Enemy Within is the expansion to the 2012 Game of the Year award-winning strategy game XCOM: Enemy Unknown. Enemy Within adds an incredible array of new abilities, upgrades and weapons to combat new enemy and alien threats. This expansion also introduces new maps and missions, new tactical and strategic gameplay, and new multiplayer content providing a fresh new gameplay experience.

Customize your squad with three new  bonus items. Instantly unlock a new recruit in your barracks inspired by the original X-COM: UFO Defense. Outfit your soldiers with specialized armor upgrades including the new Hyperion and Reaper soldier armor kits. Customize your soldiers’ appearances with a variety of colors and tints for all armor sets.

In this new set of linked Council missions, you will meet an enigmatic Triad operative, divert an alien ship’s course, and do battle with the aliens in the skies over China. The content pack also includes new customization options and a new soldier with a unique voice and story.

© 1994-2013 Take-Two Interactive Software, Inc. Take-Two Interactive Software, Inc., 2K, 2K Games, Firaxis Games, XCOM, and XCOM: Enemy Unknown, and their respective logos are trademarks of Take-Two Interactive Software, Inc. The ratings icon is a trademark of the Entertainment Software Association. Unreal® is a registered trademark of Epic Games, Inc. Unreal® Engine, Copyright 1998-2012, Epic Games, Inc. Uses Bink Video Technology. Copyright © 1997-2013 by RAD Game Tools, Inc. This software product includes Autodesk® Scaleform® software, © 2013 Autodesk, Inc. Autodesk, and Scaleform are registered trademarks or trademarks of Autodesk, Inc., and/or its subsidiaries and/or affiliates in the USA and/or other countries. © 2013 NVIDIA Corporation. All rights reserved. NVIDIA, the NVIDIA logo, PhysX, The way it’s meant to be played, and 3D Vision are trademarks or registered trademarks of NVIDIA Corporation in the U.S. and other countries. All rights reserved. Dolby and the double-D symbol are trademarks of Dolby Laboratories. DTS and the DTS Symbol are registered trademarks of DTS, Inc. and DTS Digital Surround is a trademark of DTS, Inc. All other marks are property of their respective owners. The content of this videogame is fictional and is not intended to represent or depict an actual record of the events, persons, locations, or entities in the game’s setting. The makers and publishers of this videogame do not in any way endorse, condone or encourage engaging in any conduct depicted in this videogame.

This product requires a free Steam account to play.
13,92€
Buy

This product requires a free Steam account to play.
12,54€
Buy

This product requires a free Steam account to play. This product can be activated in Europe.
23,90€
Buy

This product requires a free Steam account to play.
23,90€
Buy

This product requires a free Steam account to play. This product CAN NOT be activated in: Japan, China, Taiwan, Hong Kong and South Korea.
OUT OF STOCK
×
Activation details